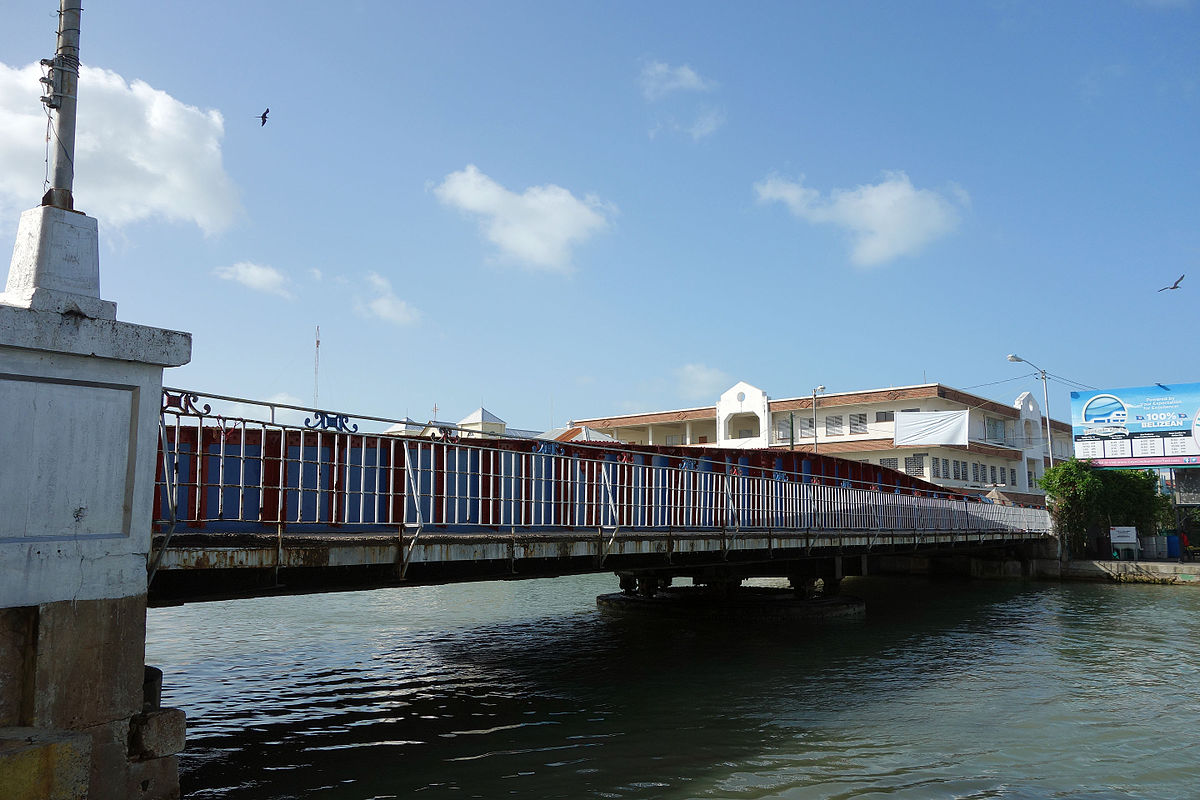 The Swing Bridge in Belize

A historical landmark and popular tourist destination, the Swing Bridge connects the north and south sides of Belize City. What makes this bridge unique is that it is the only swing bridge left in the world that is operated by hand!

The bridge was constructed in Liverpool, England in 1922 and installed in Belize City in 1923.

It was created to replace a series of several wooden bridges spanning the Haulover Creek, a tributary of the Belize River.

Swing bridges are designed to move horizontally over bodies of water, thus creating openings for tall water traffic, such as sailboats, to pass through.

Historically, the bridge was swung to allow boat traffic to pass twice per day – once in the morning, and again in the evening. The passing boats consisted mostly of fishermen traveling upriver to deliver seafood to cooperatives in Belize City and passenger boats en route to or from the cayes.

The historic bridge requires at least four people to hand crank it to become parallel with the creek and then back to its original perpendicular position. The whole process takes over an hour! Locals used to have to plan their days around getting from one side of the city to the other before the bridge swung, causing it to be a significant part of the city’s culture.

Today, since boat traffic on Haulover Creek has slowed significantly, the bridge is only swung on special occasions.

The Belize City Sing Bridge remains an excellent spot for people watching and for seeing Belize’s traditional fishing boats. Movie buffs will be excited to know that the bridge was featured in the 1980 film Dogs of War, starring Christopher Walken. In the movie, the bridge is shown being manually cranked back into place. After a series of three hurricanes caused damage to the bridge over a 70 year span, there was talk of automating the bridge. Locals, however, are reluctant for this happen since the manually operated bridge is such a cultural and historical focal point of their city.

While visiting the swing bridge, be sure to stop by the nearby Museum of Belize for an in-depth look at the country’s vibrant history.

Excellent accommodations lie just 15 minutes outside of Belize City, at Black Orchid. Black Orchid is an award winning resort featuring luxurious rooms, suites, and villas, and is the perfect base for exploring Belize City.

Black Orchid Has Been Certified As A Belize Gold Standard Hotel. We Are Opened With Enhanced Protocols. Learn More